“I just started taking the Mannatech products a couple of months ago after a really bad fall. I had fallen and smashed my shoulder so badly that I had to have a bone transplant to rebuild it. When I started the products I’d lost so much muscle strength and mobility that I couldn’t use a spoon, shower, write or type. I had to sleep in a chair because I couldn’t lie down. After just a couple of weeks on a full regime of the Mannatech products I gained enough mobility and strength to go on a planned vacation to Italy.

I’ve continued the products and have regained 5 to 10 degrees of mobility at every weekly medical check-in. I’ve also gained physical strength in that arm so typing, writing, eating, cooking and showering are no longer a problem. The doctors are amazed because at my age, 70 years old, recovery of this sort is seldom seen. I’m recommending these products to everyone.”

“Although I was fit and healthy at 45 I wanted to be able to ride my mountainbike like I was still 25. After two months of taking Ambrotose, Sport and Catalyst I noticed a real improvement. Now at 55 (ten years later), I can still power up the hills and blast down the singletracks.”

Now in my 67th year I take no prescription drugs, have the energy I craved as a young woman and I no longer get colds and infections. I will never stop taking Mannatech.

“In January 2010 I started taking Mannatech Core 5 plus MannaC. The results have been absolutely wonderful. I heard about it when a friend came to lunch and asked how I was, I said “that I had trouble in my hands and feet’…a side effect from a drug I was on and that …’I had to do something about my Immune System’. This friend said simply and definitely “Mannatech”. My friend’s father had experienced excellent results with his arthritis and because I knew him and that he would not be imagining it I started with hope.

My health thus far….or my indifferent health thus far….had included many ear infections as a child, tonsil removal, constant lack of energy moving on to what I feel sure was un-diagnosed post-natal depression, worst with my first child. The struggle of coping with a busy life and 3 children. A case of Glandular fever, many and constant colds moving into chest infections and bronchitis and the chronic fatigue that follows these things, an under-active Thyroid. I cannot imagine how many courses of antibiotics I must have consumed over the years. Removal of my gall bladder and finally my breasts.

I had just completed chemotherapy when I was introduced to Mannatech and was taking 4 drugs daily which I was expected to stay on indefinitely, and the antibiotics had again been needed for the chest infections.

I realise how fortunate I was to be connected with Karen Denniss who advised me, what and how much to take for my body. I know that without

Karen’s support and knowledge that I may not have had such success, this support that one gets on joining Mannatech is invaluable. Within 2 years I no longer needed any antibiotics.

Now in my 67th year I take no prescription drugs, have the energy I craved as a young woman and I no longer get colds and infections. I will never stop taking Mannatech.

“With going through the final stages of perimenopause, getting a decent and good night’s sleep had become quite an issue.  As part of dealing with this, I ended up talking to Catherine about it, and was guided to try the ‘Plus’ and ‘Ambrotose Complex’ powder to help my body.  I was also taking half strength HRT. Within about 1 – 2 weeks, my sleep had improved quite a bit, and the one extra thing I also noted was that my dry, flakey skin (as a result of my menopause) had begun to return to its natural previous state.  I was absolutely wrapped with this additional benefit, as I had resigned myself to accept the condition of my skin ‘drying out’. Two months into taking these two main Mannatech products I am absolutely wrapped with how I am feeling. I’m sleeping well, my skin is so much better, and I am sure my emotional state has also improved along with all of this.  So, thanks Catherine for your kind guidance and support. It’s amazing how much better you can feel with getting a good night’s sleep!”

“Yesterday I had a really long day. I was driving home from up North from 7am to 4pm. When I got home I crawled up in the roof to check some leaky plumbing, then I went for a walk up the hill before going to play bridge until 10pm. After that I called into a friends place and we talked until midnight. I never could have done this before without the Mannatech.”

“After he looked at my x-rays I was told by the physio that I had a severe condition in one ankle and the other was rapidly getting worse. I’d been in pain for several years. It made getting in shape and hiking a painful process. I’d been taking the Mannatech products since 2004 and experienced huge health advances in all kinds of areas but still had this problem.

Recently as part of my preparation for my big hike, I was told by a Mannatech consultant to double the amount of Omega 3 with vitamin D to four capsules and increase the Ambrotose complex to two teaspoons a day. Within three days the pain went away. The result…I was able to hike the

33km Routeburn Track without pain in my ankles. I’m so very grateful to find something that works.”

“Back in 1982 when I was just 26 years old I was diagnosed with problems in my left breast. I followed all the doctor’s instructions and proceeded to have chemotherapy and radiotherapy. All seemed fine for a few years and I had my first son in 1989 and my second son in 1991.

But in 1992 I was diagnosed withthe problem  again this time in my right breast. Again I followed the doctor’s instructions, this time I had the lump removed, had chemotherapy, internal and external radiotherapy.

Eleven months after finishing chemotherapy I fell pregnant with my third child, so in October 1994 I had a daughter. I never imagined that I would get the problem a third time but in 2001 I had a lump in my left breast.

It was decided that this time the breast would be removed and I had chemotherapy again. During each occurrence I did all the traditional treatments believing that there was no other alternative and that I was in good hands.

Well in 2003 I was again diagnosed with the problem in my right breast so I had another mastectomy and chemotherapy again. As a precautionary treatment I had my ovaries removed as it is believed that breasts and ovaries are linked.

Imagine my shock, horror and disbelief to be diagnosed with the same problem for the fifth time in October 2008. It was at this time that I was introduced to Mannatech products. But I was to be shocked even more when on 20th November 2008 I was told I was terminal and that there was nothing they could do for me. Have a good Christmas and get your affairs in order was what I was told.

This was very traumatic for not only me but for my family as well. My sons were 19 & 17 and my daughter was only 14. This had a dramatic effect on my daughter as she thought she was going to lose her mother.

On hearing this news Karen Denniss, who was guiding me with taking the products, advised me that it would be better to increase my intake of the products, especially Ambrotose, which I did. So here it is 2017 and I am still here, fit and well and still taking Mannatech products. I am very passionate about these products and will definitely be taking them for the rest of my life. 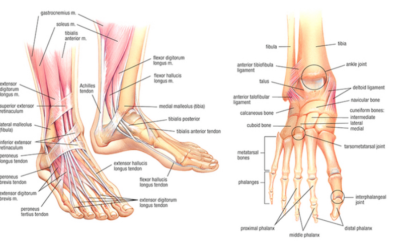 This is a tribute picture for feet because I have finally after many, many years got my left foot working again. I knew it wasn’t right, that the arch seemed frozen. A Rolfer had told me years ago that my foot was like a brick. I couldn’t really rise up on the ball of... 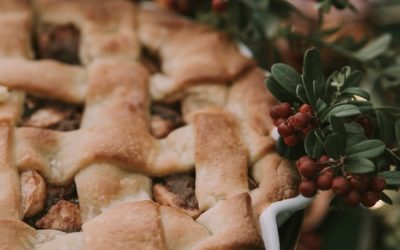 “A hundred years ago, when pies were often eaten at breakfast as well as at supper, many American housewives baked a dozen or more fruit pies every week.” This is a stunning statement from that great cookbook, The Joy of Cooking. Reading it a few years ago I laughed... 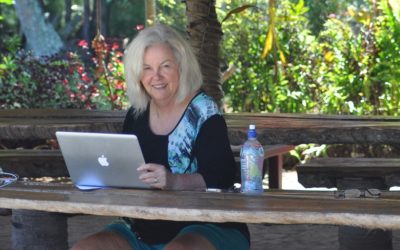 I was really pleased to finally do a post after not posting for over two years. Consistency is the  most important thing in Blogging and Social Media they say. I was aware that I was falling down badly on that most important part. Then once again, the Universe... 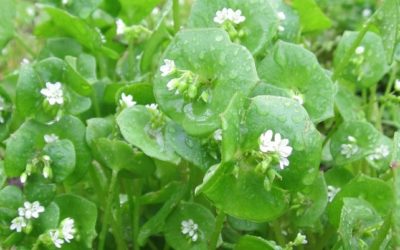 Miner’s lettuce, a yummy weed and Miner’s lettuce all dressed up with feta, activated nuts, avocado and dark oak leaf lettuce. So very YUM! As a gardener I spend a lot of time on my knees pulling out weeds that I don’t want in my garden, but I absolutely adore the... 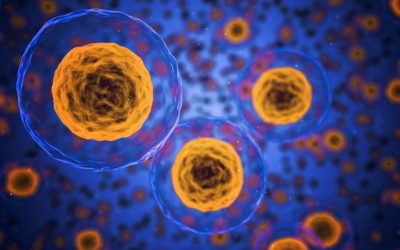 I love this video. It's like a 50's black and white version of a video game. Little immune system warriors are ganging up on and blowing up the big bad cancer cells. It's so cool and it's real life. When our immune system is working correctly we... 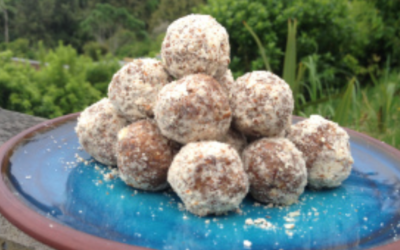 Raw food is all the rage with people who actively work to have the best possible health. I get the concept, that cooking destroys the goodness in most food, but I don't eat an all raw diet. This may be one of the few things that I'm actually moderate about. I'm not by... 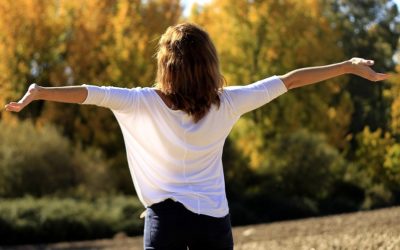 Tis the season to breathe

'Remember to breathe', is one of my most favorite pieces of advice.  Christmas is a very stressful time for the majority of people in the Western world and more and more information is coming out about the harmful effect of stress on our bodies. Most breathing... 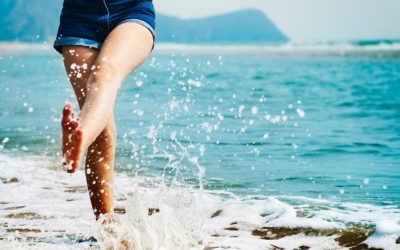 Kick, growl and punch with tears of joy in my eyes

The music is blaring, the sweat is flying and I am kicking, punching and jabbing in my Tai Fit class at the local gym.  I have tears of joy in my eyes is because for me this is a dream come true. I had watched a group do this when I was desperately trying to just get... 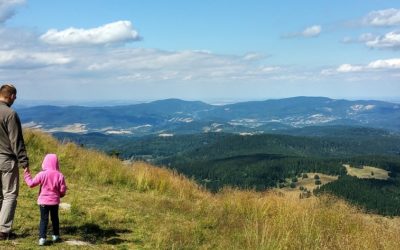 My Father taught me how to burp really, really, loudly. We used to have burping contests. Not the usual training for a little girl but heaps of fun. The good and bad news of this is that I can out burp just about any man or woman but I sometimes burp really loudly...

A Mannatech Independent Associate and supplier of Mannatech products

Based in Wellington
Supply New Zealand wide and Overseas